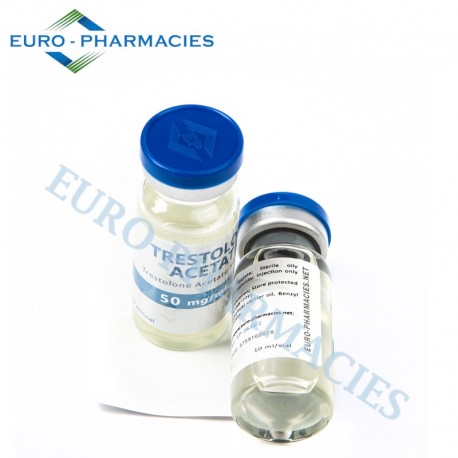 This product is no longer in stock


Trestolone Acetate has a minimum dosage of 10mg/day & as high of a dose as 50mg/day.


Trestolone was originally made for androgen substitution, yet it encompasses an immense amount of treatment applications.
In bodybuilding it is a synthetic steroid used that is considered highly powerful , & it exceeds the strength of testosterone. It is considered beneficial for the purpose of bodybuilding & strength training. It is acknowledged for its quick & effective results for the BB who is looking for fast strength improvement & is serious about increased mass in a short time.
Medical applications include: Testicular Failure, Contraception Therapies, Bone Mass Loss, Benign Prostatic Hyperplasia , Prostate Cancer, Cachexia (know as a muscle wasting syndrome), Primary Hypogonadism, Anabolic Steroid Induced Hypogonadism , Baldness, & Sarcopenia.
Information:
Trestolone Ace will be found in an oral, injectable, implantation, & transdermal form, but it is not yet available as a prescription drug.
Trestolone Ace is a versatile steroid that should be cycled with a testosterone of any ester (such as Enathate, Cyp, or Prop). Trestolone cutting cycles can incorporate any of the traditional definition compounds such as, but not limited to: Var, Primo, T-bol, & Winny.
When combined with a mass building cycle, which should most always be Test based, some of the sterods that stack well including, but not limited to: Dbol, Halo, EQ, Tren (either acetate or enanthate), & Drol (A-bombs) (not recommended stack with Deca as it is a similar but more powerful compound).
The uses of of Trestolone Ace are essentially that of a stronger version of Deca, however it has a much shorter half-life. It's hypertrophic abilities are seen to be stronger than both Testosterone & Trenbolone.

Side Effects:
It Aromatizes more like a testosterone than a nandrolone. Thus, the side effects of Trestolone could easily be compared to Test Prop (such as possible male patterned baldnes, gyno, some water retention, etc)