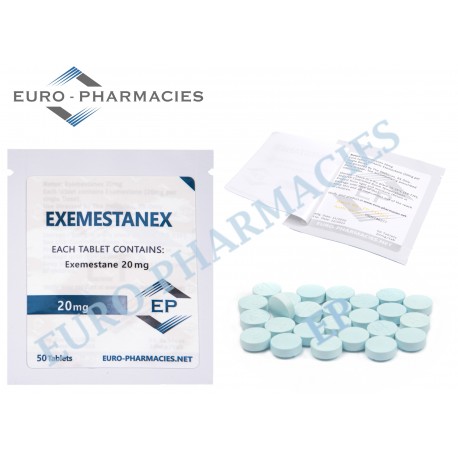 Shipping - inside USA only

History:  Initially researched as a treatment option for breast cancer in the late 90’s, Aromasin was demonstrated to be superior to Tamoxifen and was subsequently released by Pfizer.  A fairly recent addition to the anti-estrogen marketplace, Aromasin’s clinical success transferred over into the BB’ing community, where it is now considered standard fare on UGL products lists the world over.

Method of Administration:  Aromasin is administered in oral form.

Primary Use:  Aromasin, like all anti-estrogens, is used to help normalize/maintain estrogen levels within the body.  Aside from the prevention of estrogenic side effects, estrogen management can assist users in maintaining a hard & dry appearance when using aromatizable drugs.  This is especially useful prior to a contest, when displaying this looks is essential to success.  Aromasin accomplishes this function by binding with the aromatase enzyme, which is responsible for converting testosterone (and other aromatizable drugs) into estrogens.  Once bound, Aromasin will permanently deactivate the aromatase enzyme, preventing any further interaction and eliminating the possibility of experiencing estrogen rebound.  This ability to permanently deactivate the aromatase enzyme is what classifies Aromasin as a suicide inhibitor, as not all anti-estrogens have this effect.  This advantage is one of the key differences between Aromasin and several other anti-estrogens.  However, Aromasin needs to be dosed frequently in order to maintain adequate blood levels of the drug; preferably twice per day, or every 12 hours.  This is in significant contrast to several other AI’s, which only need to be dosed every few days.  Additionally, unlike all other AI’s, which have been shown to potentially have a negative impact on cholesterol levels, Aromasin is neutral in this regard, making it the more heart health alternative.