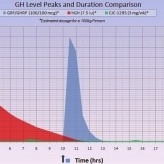 I want to share with you a short story on an injury that accord to me 4 months ago, that I fixed in more than HALF the time expected by doctors.

One fine afternoon I was at my gym, doing lateral raises, on the the 3rd set rep 9 as I was pulling up the dumbbells I felt a sharp tight pull in my shoulder. I didn’t think much of it, because at the time the pain was not so bad. So I just ended my work out early. During that weak I notice while I had some pain in my arm still, my main concern was the loss of strength, my right arm was at around 70% of what it normally would be, and I just could not put my finger on why, This kept up for some time. FINALLY I decided to go to the doctor and find out once and for all what had happened. Somehow during my rep, I partially tore the Glenoid Labrum – or for a better term, where my delt and my shoulder connect.

The doctor ordered that I cease all workouts for at least 8 weeks, then be reevaluated as he said I did not need surgery but he could do it to repair it if I wanted that option, I of course wanted to avoid that, because who knows what my recovery time then would have been.

I then started thoroughly researching peptides and their uses to increase collagen synthesis, and then came across some great information regarding the use of GHRP’s and GHRP’s in elderly people that had tears and so on, and the remarkable recovery’s they were making even at their age!

So I began Using GHRP-2 alongside Mod-Grf (1-29) Or more known as CJC-1295 w/o Dac, these 2 peptides when used side by side create something magical in your pituitary gland, and your body.

Mod-Grf(1-29) or CJC 1295 w/o Dac when combined with a GHRP acts like a multiplier so to speak, increasing the effectiveness of the Growth Hormone Releasing Peptide, making your pulses even Higher!  If you take Mod-Grf(1-29) solo, it will do absolutely nothing for you, but when used alongside a GHRP the results are spectacular.

Look at the Chart Below:

I dosed the two peptides, at 100mcg each 3x daily, Morning, Post Workout, and Pre Bed, On days that my shoulder had to be used, I used more therapeutic exercises to help build tendon strength and range of motion exercises.  After week 1 I felt a significant improvement in my sleep, After week 3 I felt my shoulder was much less tight, and some strength was starting to return. After week 5 I decided to go back to full weights on shoulder lifts, and compound lifts that would possibly agitate my shoulder. IT FELT GOOD!  While I still was not at 100% there was a complete difference, the pain was minimal if not gone, my range of motion was back, and the weights started to catch right back up.

After a follow up on week 6 with my doctor, he said the tear has healed nicely and I passes all physical range of motion tests he performed, a whole 2 weeks earlier than he anticipated, and I lifted weights.

I am now 16 weeks past this injury and I still dose this combination of peptides 3x daily, I have not had an injury since, and my shoulder has not bothered me in any way. I can attest that these peptides deserve a place in any weight lifters or active person’s life, for the sheer fact that while its not going to stack the pounds on you, its going to give you other benefits that will intern help you stay active, Keep healthy and Feeling GOOD!

Take some time and read and research the use of these marvelous peptides yourself, you will see that their uses go far beyond, repair, joint and tendon health. You can also use them to build muscle mass, increase the effectiveness of your GH if you’re supplementing, lose Bf% and so on! The possibilities are endless.

Ghrp-2 Is more potent than GHRP-6 and Ipramorelin, GHRP-2 has a stronger effect on prolactin and Cortisol at all dosing levels rising to the high normal range. It has minimal Gastric affects, and should not cause stomach discomfort or major hunger pains like its counterpart GHRP-6, an effective dose of GHRP-2 is the same as all GHRP’s @ 1mcg per 2.2lbs of body weight, most users however dose at the saturation dose which is 100mcg. With GHRP-2 you do not need to cycle off, as your body will not desensitize to the compound.

Hexarelin is just as strong as GHRP-2 but affects Prolactin, and Cortisol at much higher levels, Hexarelin has been shown to desensitize no matter the dose, and no matter the length of time used, and can happen at any moment, If this does happen, stopping use for a 8-10 day period will allow your body to utilize the compound once more. Hexarelin does affect gastric mobility and can cause stomach discomfort in users. Saturation dose is 100mcg

Ipamorelin is as potent as GHRP-6 , and does not affect prolactin or cortisol at any dose. Ipramorelin does not desensitize, and use can be on going, without losing effect. Ipamorelin does not cause any gastric issues, and will not increase hunger to the point of pain. Out of the 4 GHRP’s Ipamorelin is the safest, and has the least amount of sides than any of the GHRP’s on the market today, however, GHRP-2 and Hexarelin are the most potent form of GHRP. Saturation dose is 100mcg

GHRP-6 is as potent as Ipamorelin, and does not affect prolactin and cortisol under doses of 100mcg, but only affects these hormones minimally above 100mcg, GHRP-6 does affect stomach, and can cause major stomach discomfort in some users, It also increase Appetite greatly, and normally within 30 min after administration, Most use GHRP-6 to bulk with because of the increase in appetite. Saturation Dose is 100mcg

Mod-Grf(1-29) Or more commonly known as CJC-1295 W/O Dac, ( but really isn’t lol ) Is a GHRH (Growth Hormone Releasing Hormone) Taken alone will be as effective as drinking your Test E, ( not effective ) but when combined with a GHRP it nullifies the presence of Somatostatin which would halt a GH pulse. Think of Mof-Grf as an Amplifier, it takes the GH pulsed caused by GHRP’s and Amplifies its effect making the GH pulse received even greater. All the while turning “off” the presence of Somatostatin and allowing a high GH pulse. Getting Modified GRF is important because regular GRF such as cjc-1293 degrades very rapidly once injected, and the end result is a 4% usability, Modified GRF is Tetra Substituted. Because of 4 amino acid substitutions it will not rapidly metabolize in plasma and will make its way to the pituitary where it will affect growth hormone release, and the end result is a 90% plus usability in the blood stream.