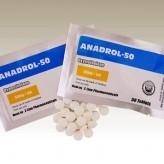 Bishop22 is the Z-Team's newest member, and very knowledgeable individual, This is his first entry of many more to come, Enjoy! - OSL

Oxymetholone commonly called by athletes "A50" or "A-bombs" was initially developed as a compound to help people with anaemia, Thus, it is clearly an effective agent for promoting weight gain, increasing appetite, gaining strength, and increasing Red Blood Cell count. And, as with most AAS it has it's downsides as well. Oxymetholone will inhibit your body's natural production of hormones (testosterone, etc), will negatively affect your blood lipid profile, can cause water retention, Paradoxically, although one the benefits touted by it's original manufacturer (Syntex) is that it can be used to stimulate weight gain through increasing appetite.

I think, in order to gain a complete understanding of the Oxymetholone effects on body, we need to take a look at its advantages contrasted with its disadvantages. Oxymetholone is a DHT-derived compound, and is 17-Alpha-Alkylated steroid, meaning that it has been altered at the 17th carbon position to survive oral ingestion. Most oral steroids are 17aa, and this helps them make it through your liver in a useful form.

From personal experience, however, I can tell you that gains from Oxymetholone are quite dramatic for the first 3 weeks, and then quickly level off. Unfortunately, I find that the side effects experienced from Oxymetholone (which include a headache, bloating, elevated blood pressure) remain for the entire duration of use but I find, as usual, side effects for this drug are pretty much half legend and half truth. Since Oxymetholone is derived from DHT, it can't actually convert to estrogen (via the aromatase enzyme), and it's not a progestin or a compound with progestenic activity so the estrogenic side effects produced by it are of a very mysterious nature.

It has been speculated that perhaps it can stimulate the estrogen receptor without actually being converted to estrogen that's about as plausible an explanation as I've heard However, things really get strange, when Oxymetholone has been used in studies to alter the female reproductive/menstrual cycle; in those cases, it has lowered plasma progesterone levels! One would expect that an AI (aromatase inhibitor) wouldn't be of much use with this drug, but many have found that Letrozole (which has, in some cases been shown to reduce estrogen in the body to an undetectable amount) can greatly reduce or even eliminate many of the more noticeable side effects of Oxymetholone, such as the bloating.

As I've stated, however, the sides from this drug are certainly no joke, but are easily preventable, and controllable. One study even showed very few sides for subjects using up to 100mgs of Oxymetholone.Some people state that they used it at doses up to 150mgs/day. Clearly, Oxymetholone hepatoxicity has been a bit exaggerated, in some circles. Be that as it may, my suggestion is still to limit Oxymetholone use to 6 weeks, at a maximum& even if just to err on the side of caution. Of course, I have personally run this drug for much longer..

I'd probably be willing to include Oxymetholone in a cycle including injectable steroids, but not other 17aa compounds. I'd make any 6-week-run of this compound begin at the start of a cycle, as a form of "jumpstart" towards seeing gains quickly. I'll go out on a limb here and say that utilizing Oxymetholone as a "Jumpstart" is the most popular use of this drug for athletes and bodybuilders today. I'll also say that this drug is immensely popular with strength athletes who don't have to worry about weight classes (Field athletes and strongmen), and with power lifters in the heavier weight brackets. It's also important to note that in one study by Schroder et. Al, Oxymetholone showed that it has the ability to lower serum SHBG (Sex Hormone Binding Globulin which binds to your free test and makes it no longer useful for anabolism, among other things) concentrations by 54.9 25.8 and 45 16.2 nmol/l in the 50- and 100-mg treatment groups. This means there will be more free test circulating around your body when you take this drug clearly, this would produce some synergy when stacked with other steroids. Given the large amounts of weight and strength which can be gained in a relatively short time span on this drug, I'm sure this comes as no surprise to many.

Another important and often understated characteristic of this compound is that Oxymetholone doesn't bind well to the androgen receptor (Relative Binding Affinity = too low to be determined) which is the lowest I've ever read about. Basically, what this tells me is that there are a lot of non-receptor mediated effects from this steroid, making it a very potent addition to ANY BULKING stack, because it won't be competing for the receptor sites with the other steroids you're using. It's also, as you may have guessed, a very poor choice for a cutting stack.