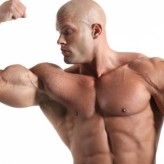 How many of us would love to have a bit more peak to our biceps…or maybe some more roundness to our delts…or how about adding some much needed size to our calves?  As BB’rs, we are always seeking to perfect our physiques, but genetic short-comings can make this an extremely difficult task.  Most of us at one point or another have struggled with weak points, but no matter how hard we try to bring them up, they seem impervious to growth.

Still, others of us aren’t so much concerned with bringing up a weak body part, as we are in attempting to make an already good body part a great one (who doesn’t want Arnold-like biceps?).  Regardless of which side of the spectrum we find ourselves on, we are all pushing towards the same ultimate goal of making certain areas of our physiques bigger & better than ever.

To this end, BB’rs have tried just about everything in order to make this a reality and while some of these attempts were met with success, others were not quite so successful.  Some of these attempts involved the implementation of unique workout routines, which were designed to enhance growth through either an increase in blood volume, extreme stretching of the fascia, or muscle-overload.  Others involved injecting various steroids into a body part of choice, which in the case of esterfied steroids resulted in temporary site growth through inflammation, while non-esterfied steroids were able to exert a mild local effect by being made available to a larger number of local androgen receptors.  Other BB’rs chose to utilize temporary site enhancing compounds immediately before a competition, such as Esiclene & Nolotil, which worked through inflammation and subsequent local swelling of the injected muscle.

In recent years, we have seen the emergence of Synthol, which when used correctly, leads to a significant increase in the size of the treated muscle.  However, Synthol is not without risks, and it is these very risks which have led a substantial number of BB’rs to shy away from its use.  In addition to the daily injects, as well as the pain, swelling, and discomfort one experiences when following a properly structured Synthol protocol, it also carries with it an elevated risk of infection & abscess compared to many other Injectable drugs.  Lastly (but certainly not least), a botched Synthol program can leave the user looking anything but better.  Distorted and un-natural looking muscles are unfortunately a common side effect of improper Synthol use.

For those looking for an effective method of permanent site enhancement, but who do not want to assume the risks or endure the hardships that some of these other methods provide, there is an alternative…..peptides.

Today we have a number of peptides reported to lead to site enhancement.  Of these, the different IGF’s and their variants appear to be the most promising.  Let’s start out by looking at DES (1-3) IGF-1 and see why this version is the most effective of the IGF’1s for site growth.  First of all, IGF-1 (Insulin-like growth factor) is a peptide hormone with a similar sequence to Insulin and also shares with it many of its same properties.  IGF-1 is produced mainly in the liver via growth hormone and while DES has a direct anabolic effect on muscle tissue, it also exhibits a secondary and indirect anabolic effect through enhanced nutrient shuttling.  DES also inhibits muscle cell Apoptosis (prevents injured cells from dying) and has demonstrated an ability to cause muscle cell hyperplasia.

DES differs from standard IGF-1 in that the last 3 aminos acids in the sequence have been cleaved from the chain, resulting in a truncated form of IGF-1, which contains 67 aminos instead of 70.  This alteration changes DES in a number of ways from its other IGF-1 cousins, such as IGF-1 and IGF-1 LR3.  Unlike DES’s counterpart, IGF-1 LR3 (which is a longer acting form of IGF-1), DES’s half-life is much shorter.  This shortened half-life enables DES to live out the majority of its life while still present in the injected muscle and therefore, the majority of its effects will be exerted locally, prior to the molecule becoming metabolically inactive.  With this being the case, one might ask “Then why not just use IGF-1 LR3 and experience whole-body growth, instead of limiting it only to the injected area?”  If we were comparing regular IGF-1 to IGF-1 LR3, I would have to agree, but being that we are dealing with DES IGF-1, the game changes considerably.

Des’s ability to stimulate growth of the injected muscle more effectively than other forms of IGF-1 lies in its potency, it’s inability to be bound by binding proteins, and its ability to attach itself to lactic acid altered IGF-1 receptor sites.  In short, Des is 1000% more anabolic than IGF-1.  Additionally, since DES cannot be consigned to metabolic inactivity due to binding proteins, every mcg of DES which is injected will remain metabolically active and available to attach to and activate IGF-1 receptor sites.  This allows the peptide to exert its pronounced anabolic effects on muscle tissue without hindrance.

In regards to DES’s ability to attach to lactic acid degraded receptor sites, this beneficial function is unique to DES alone.  During a workout, when a muscle’s IGF-1 receptor sites are exposed to lactic acid, they become temporarily deformed and as a result, both regular IGF-1 and IGF-1 LR3 are effectively prevented from attaching to these receptors.  However, DES does not share this same shortcoming with its cousins, as it demonstrates the continued ability attach to these receptor sites, despite this deformation.  This further increases the potency of the compound, as only DES can act in this fashion to penetrate and turn on a muscle’s anabolic machinery during a workout, which is a critical time for a muscle to be flooded with growth factors.

Let’s look at our 2nd candidate for site enhancement, known as MGF….or more specifically, PEG MGF.  PEG MGF (pegylated mechano growth factor) is an exercise induced and locally expressed splice variant of IGF-1, which has a longer half-life than regular MGF and has been demonstrated to be even more anabolic than IGF-1.  In laymen’s terms, MGF production takes place as a direct consequence of exercise, in which it is made inside the muscle from IGF-1 and subsequently utilized by a trained/damaged muscle for recovery and growth.  Like IGF-1, MGF exerts its effects through the IGF-1 receptor, acting primarily as a cell proliferator, while also having the potential to induce muscle cell hyperplasia.  The PEG portion of the molecule does not change the function of the peptide, but rather, simply extends its half life in the body from minutes to hours.  Because the PEG form of MGF stays active for hours, its effects are not limited solely to localized growth, but will also result in systematic effects, as well.

There is a synergistic effect when DES IGF-1 and PEG MGF are combined for the purpose of site enhancement.  However, with peptides being a new frontier of BB’ing pharmacology, it is likely it will be several more years until we fully understand what these compounds are capable of and know how to best use them for optimal results.  Still, through real world experience in the BB’ing community, we have determined certain dosing & timing guidelines to be effective for garnering substantial results in terms of site growth.

According to current knowledge, one of the most effective protocols involves IM injects of DES (1-3) IGF-1 into the targeted muscle on a daily basis, with it being injected pre-workout on days the targeted muscle is trained.  An effective dosing range is between 100-150 mcg bi-laterally (For example: half the total dose would go into each bicep).  Dosing recommendations with PEG MGF vary much more widely than they do with DES, although a 2-3X weekly IM injection schedule has proven to be effective.  A typical dosage is 200 mcg per inject, split bi-laterally.  This pattern of use coincides with the body’s own natural training response.  Below is an example program which has proven to yield positive results:

*** On workout days, DES is injected 5-10 minutes prior to training, while MGF is injected immediately post-workout.

Peptides provide us with yet another unique and effective weapon in the quest for site enhancement.  Visible results typically begin to manifest themselves within 2 weeks of use, but due to the nature of these drugs, longer-term use will bring forth one’s best results.   DES (1-3) IGF-1 and PEG MGF represent a new and safe category of supplementation, which is diverse from other categories of site enhancement drugs.  Used properly, they are sure to help you move toward your physique goals.